Cataracts are the leading cause of visual impairment in the world today.

Aging is the most common cause. A cataract is a progressive, painless clouding of the lens inside the eye. Cataracts block light, making it difficult to see clearly. Over an extended period of time, cataracts can cause blindness. They are often related to growing older, but sometimes they can develop in younger people. 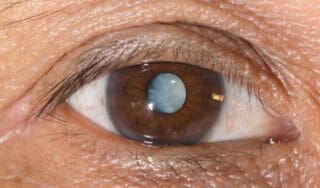 The exact cause of cataracts is unknown. While the risk grows as you get older, these factors may also contribute:

Most age-related cataracts develop gradually. Other cataracts can develop more quickly, such as those that occur in younger people or in people with diabetes. Doctors cannot predict how quickly a person’s cataract will develop.

What is the solution if you get cataracts?

If you have vision loss caused by cataracts, that cannot be corrected with glasses, you may need surgery to remove the cataract.

Cataract surgery in Lansing is done on an outpatient basis. The cloudy lens is removed and replaced with an artificial lens (IOL). The surgeon extracts the cataract by making an opening (incision) in the outer layer of the lens. S/he then uses high-frequency sound waves to break up and remove the cataract, leaving behind the posterior capsular bag into which they insert the new, clear IOL.

While complications from cataract surgery are rare, the most common are bleeding, infection, and changes in eye pressure, which are all treatable when caught early. Cataract surgery may also slightly raise the risk of retinal detachment.

Can Cataracts come back after surgery?

Sometimes a few cells (too small to be seen during surgery) remain attached to the capsular bag. “In some people, the cells then cause scar-like tissue to develop on the capsular bag, behind the new artificial lens (IOL),” Dr. Bosak explains. “As the cells grow, they create a very thin cloudy film, which then affects your vision.”

Why does the film on the capsular bag make it hard to see clearly? Just like the cloudy lens did before surgery, a secondary cataract blocks some light from reaching the retina.

The good news is there is a simple, painless fix for secondary cataracts. It is an in-office procedure called a YAG laser capsulotomy. It requires no anesthetic — just some drops to numb your eye and dilate your pupil. The procedure is quick — just a couple of minutes — and recovery is fast, as well. “Typically, your vision improves in a day or two.” Dr. Bosak adds.

If you want more information or are considering cataract surgery in Lansing, give us a call. 517-393-2660 or you can email- patientcare @ GoodrichOptical.com.