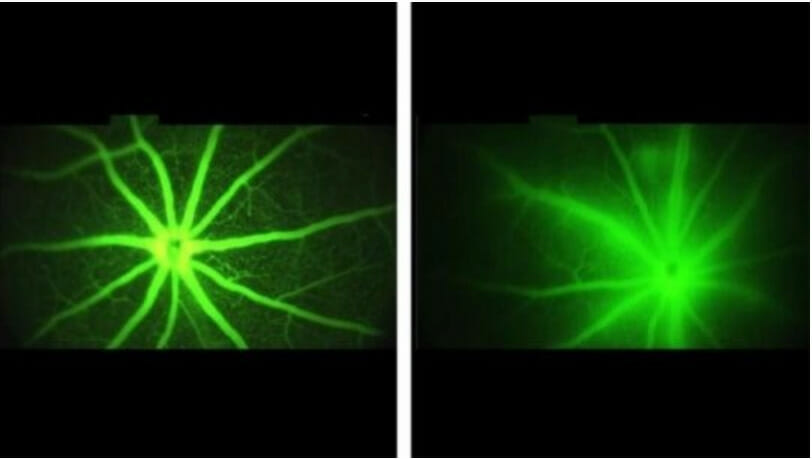 In studies with lab-grown human cells and in mice, Johns Hopkins Medicine researchers have found that an experimental drug may be twice as good at fighting vision loss as previously thought.

In studies with lab-grown human cells and in mice, Johns Hopkins Medicine researchers have found that an experimental drug may be twice as good at fighting vision loss as previously thought.

The new research shows that the compound, named AXT107, stops abnormal blood vessels in the eye from leaking vision-blocking fluids. These results build on previous research that showed the same compound stopped the growth of abnormal vessels in animal studies of the blinding disease diabetic macular edema and wet age-related macular degeneration.

Current drugs for diabetic macular edema and wet age-related macular degeneration focus on halting the growth of these abnormal vessels to preserve what vision is left. The current standard of treatment is monthly injections directly into the eye to suppress new blood vessel growth. These frequent visits can be a burden for patients due to the discomfort, a small risk for each injection and, for some patients, difficulty getting to the appointment because their vision is not good enough to drive.

“Our findings give us a better understanding of how this potential treatment stops the disease from progressing and does it more quickly, efficiently, and has a longer duration than current drugs used in people with vision loss of this kind,” says Aleksander Popel, Ph.D., professor of biomedical engineering at the Johns Hopkins University School of Medicine.

The study was published in the Feb. 21 issue of the Journal of Clinical Investigation Insight.

In healthy eyes, the cells that make up blood vessels are bound together by proteins residing on the surface of the cell that are directed into place by Tie 2, another protein. Tie2 proteins pack tightly together where cells meet their neighbors and act like Velcro to create a fluid-tight connection between cells in the blood vessel’s wall. In diabetic macular edema, the Tie2 proteins disperse across the cell and no longer can maintain the fluid-tight barrier between the inside of a blood vessel and the outside. Gaps form between the cells, allowing fluids to permeate into the surrounding tissue.

To understand how the drug they developed could strengthen these connections, the researchers designed a series of experiments to explore how AXT107 affects the control of Tie2 and the Velcro-like proteins.

In their first experiment, the researchers used cells derived from human blood vessels grown in the lab that mimicked those seen in wet age-related macular degeneration. When they added the AXT107 drug to these cells, the researchers found that AXT107 initiated a series of changes to cellular proteins. Using a technique to measure protein changes, the researchers found that Tie2 proteins seemed to migrate across the cell. Groups of Tie2 proteins began to congregate where cells met their neighbors, and began rebuilding connections with other blood vessel cells.

The researchers note that when observed under a microscope, the cells went from jagged-looking around the edges to having smooth and continuous outer edges that could be better suited for one cell to fit snugly against another. “It was like zipping them up with a zipper,” says Popel.

The researchers further tested whether these smooth cells could create a watertight barrier, which would be necessary to create a blood vessel that doesn’t leak. So they grew the cells in a single layer and tested whether fluid could pass through by pouring a fluorescent liquid on top of the cells and checking to see if any of the glowing liquid ended up underneath. The researchers observed that cells treated with 100 ?M of the AXT107 drug allowed 2.5 times less dye through the cell layer than control cells receiving no drug. This showed the researchers that the drug helped blood vessel cells create a watertight seal between them.

The researchers treated the engineered mice with leaky blood vessels, like those seen in macular degeneration, with injections of the AXT107 peptide into the animals’ eyes. After four days, the researchers found that in mice treated with AXT107, about half as much of the fluorescent dye leaked from their vessels as in animals that received saline injections containing no drug. These results, say researchers, show that the AXT107 drug was able to seal up leaking vessels and prevent vision-blocking fluids from permeating into the surrounding tissue.

Popel says previous studies of AXT107 in animal models showed the drug lasted longer than current treatments by forming a small clear gel of slow-releasing drug in the eye. If proved effective in humans, patients might need only one or two injections to the eye per year, instead of the monthly injections that are the current standard of care.

Popel says AXT107 provides a new therapeutic approach that targets two clinically validated pathways for retina diseases while the anti-VEGF agents only target one aspect of the disease. “In addition to potentially improving the response for patients, the longer duration of AXT107 may allow for less frequent dosing, thus reducing the treatment burden for patients,” says Popel.

The researchers say they plan to test the AXT107 peptide for safety and efficacy in clinical trials of people with diabetic macular edema next year.

Materials provided by Johns Hopkins Medicine. Note: Content may be edited for style and length.

previousTreatment could improve sight in those with vision loss